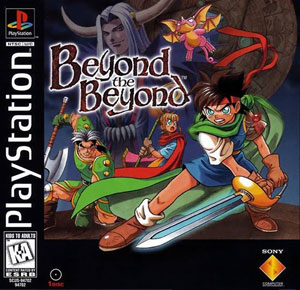 For context, I’ll be starting with a bit of history. Beyond The Beyond is a PS1 RPG that doesn’t particularly stand out as a classic, but is definitely a little gem that I hold dear. I’d call it my favorite RPG I’ve never finished. It stands in a nice middle ground between Dragon Quest and Final Fantasy’s aesthetics: vibrant and colorful like DQ, but somber in tone like FF, though unlike both it’s purely fantasy. You won’t be running into any robots in BtB! The game does have some modern relevance however: some call it the beta to the Golden Sun series as it was developed by Camelot and its sole composer was Motoi Sakuraba, known for his work on the Golden Sun, Tales of, and Souls series.

With the history out of the way, I can get to the real point of this post: a particular track Sakuraba contributed to Beyond The Beyond and how powerful it is.

This is the most common town theme that you’ll hear on your travels across the dangerous and monster infested overworld. Hearing it is often a relief, as it means a save point is nearby.

In Beyond The Beyond, the continent is at the mercy of an empire that is gradually gaining control with the help of powerful and corrupt sorcerers.* When you begin the game, you are in the care of a friend of your father’s who is a knight at the castle resisting this force. Your name is Finn, and you live with your friend Annie, her brother Percy is also a knight fighting the war.

Eventually the two of you leave your small town and enter the world.

As you travel to villages you are greeted with peace through this track, but as it goes on, you realize that trying to live a normal life is only a way these villages cope, as they know all too well it’s only a matter of time before their quiet lives are deemed wrong by the empire and peace as they know it will end swiftly in blood. The strings of the Mountain Cottage are meant to form this inescapable anxiety, both for the townsfolk, and the player who knows this world is still far from peace.

Mountain Cottage is what “taking it one day at a time” sounds like.